Including an introductory talk and participatory workshop with the artists, and seminars in association with the National College of Art and Design and the Institute of Art Design and Technology Dun Laoghaire.

This exhibition curated by Barry Kehoe in the MART Gallery brings the work of Nina Fischer and Maroan el Sani to Dublin for the first time. The two Berlin based artists have been working together since the early 1990s documenting modern ruins, forgotten sites that remain as traces refusing to disappear and communities that resist the pressures of being overpowered by problematic urban development and catastrophe. They also explore the influence of cinematic memory on collective memory in locations where, as film locations in cinematic narratives, the cinematic memory has superseded local histories and narratives. Their art works are part of a wider tradition in socially engaged art practice that is both an effective and proactive form of resistance to tendencies of forgetting and amnesia embedded in urban cultural practices, architectural development and the economic structures of the contemporary world.

Though they are not psycho-geographers per say, they share much in common with modes of subversive resistance to the changing urban environment found in Baudelaire’s flâneur, Guy Debord’s psycho-geographer, and Freud’s ideas of the uncanny. Their explorations of various sites around the world highlight discrepancies between official perspectives, national histories, urban policy and city planning that don’t recognise or may even be trying to consign to oblivion local knowledge, hidden histories and the lived experiences of counter cultures. Acting as detectives and sometimes almost in the role of political or social activist they uncover “blind spots” in the narratives of site specific histories, always conscientious of their position as artist in any given location or community where they find inspiration for their work.

From 2007 to 2010 the artists were Associate Professors at the School of Art and Design in Sapporo City University in Japan. During this time they continued making works based on their understanding of “blind spots.” These included the two works selected for the current exhibition: Spelling Dystopia (HD,16:9, 2 channel video installation, colour, stereo, 17:25 min. 2008/9) and Narita Field Trip, (HD, colour, stereo, 30 min. 2010).

Narita Field Trip looks at how two Tokyo teenagers deal with the experience of encountering a farming community that is fighting against the expansion of Narita airport, a development that threatens to swallow and destroy their farms, homes, livelihood and community.

Spelling Dystopia, is a film that explores a community’s memory of the abandoned coal mining centre, Hashima Island, once the most densely populated place on earth, now known only as the backdrop for the teen horror movie Battle Royale (2000) and as a home for the Bond villain in Skyfall (2012).

More recently the artists returned to Japan to make Spirits Closing Their Eyes, (2012) and I Live in Fear – After March 11 (2013) the latter of which was shown in the IFI by the Experimental Film Club as part of the current exhibition programme. These most recent works “focus on the current physical and psychological state of emergency which oscillates between actual threat and subtle changes in everyday habits,” since the catastrophe of the Fukushima Nuclear disaster.

These art works that the artists have made in Japan also touch on the tensions that arise between the forces of globalisation and specific local narratives.  These tensions have implications for all citizens of the world. The works that have grown from specific sites, events and communities can also have universal consequences that resonate and can affect the daily lives of people in distant and far off places on the other side of the planet.

At the former West Congress in 2013 where both Nina Fischer and Maroan el Sani were participating artists one of the main public lectures was given by Homi Bhabha, Director of the Humanities Centre at Harvard University. He delivered a keynote lecture that began with the idea of the cosmopolitan (the citizen of the world) and he spoke of Kant’s idea of hospitality and the ethics surrounding how we should behave to strangers.  He described the way in which, as human beings, we share the planet and because we live on a globe if we take a position where we are moving away from a person we are in fact also moving towards them in the opposite direction.

This anecdote highlights something of the reality of being part of this world and the problematic position of avoidance or disregard toward any of our neighbours local or global.  It is a way of illustrating that no matter how far we feel removed from many of the others with whom we share the planet we are ultimately and profoundly connected to one another. 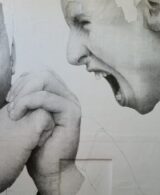 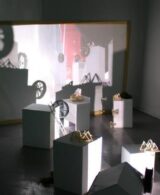