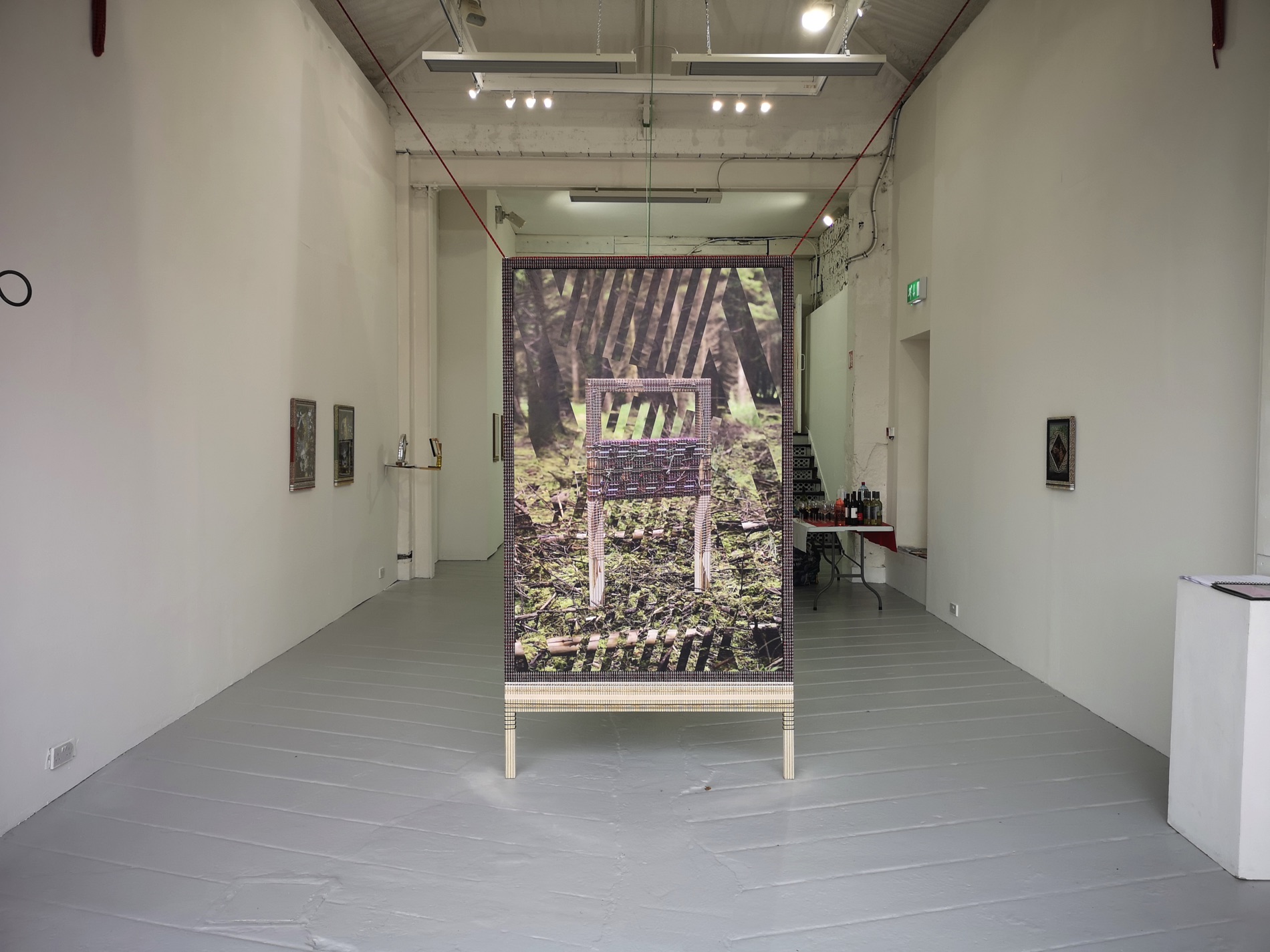 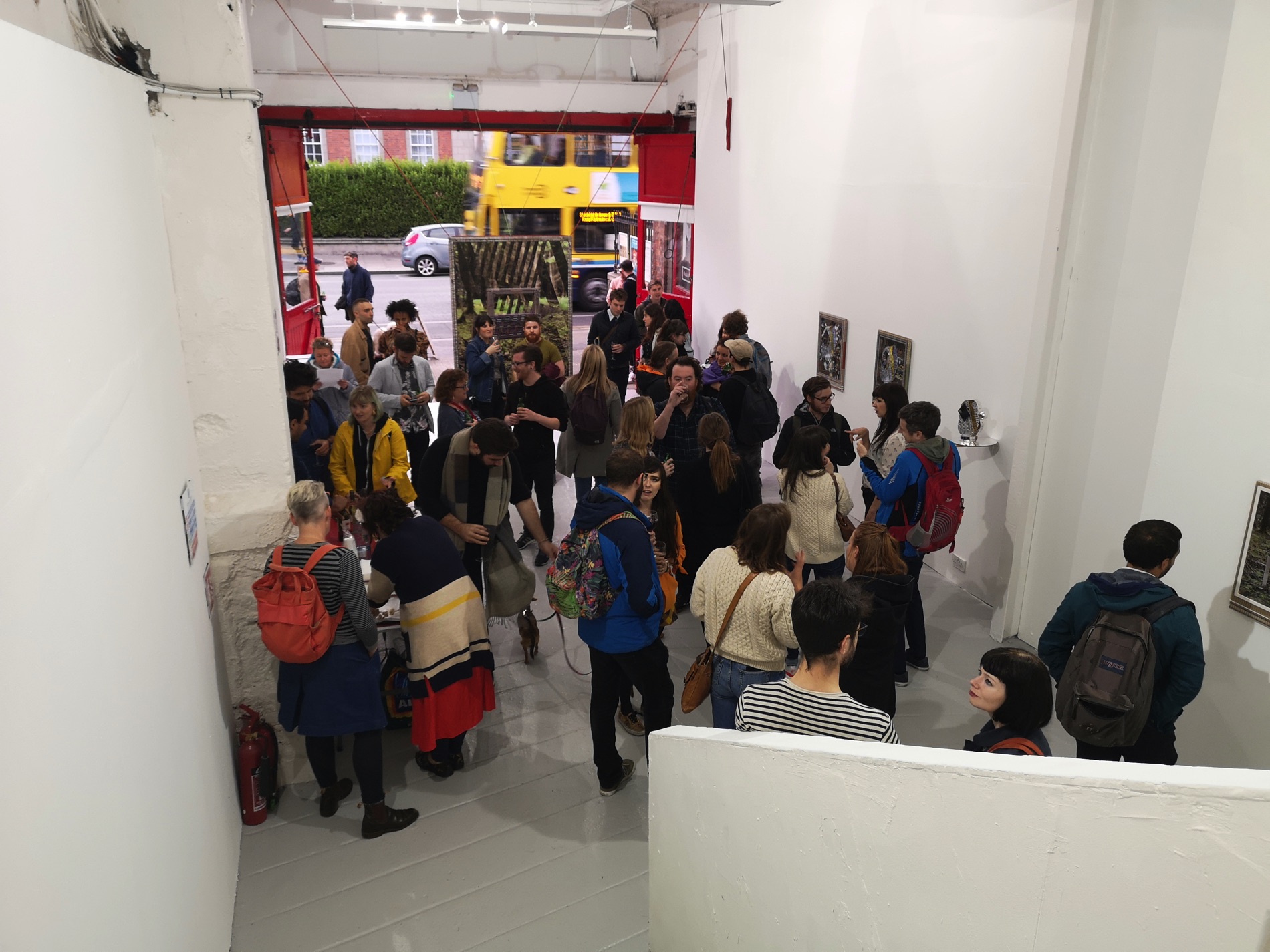 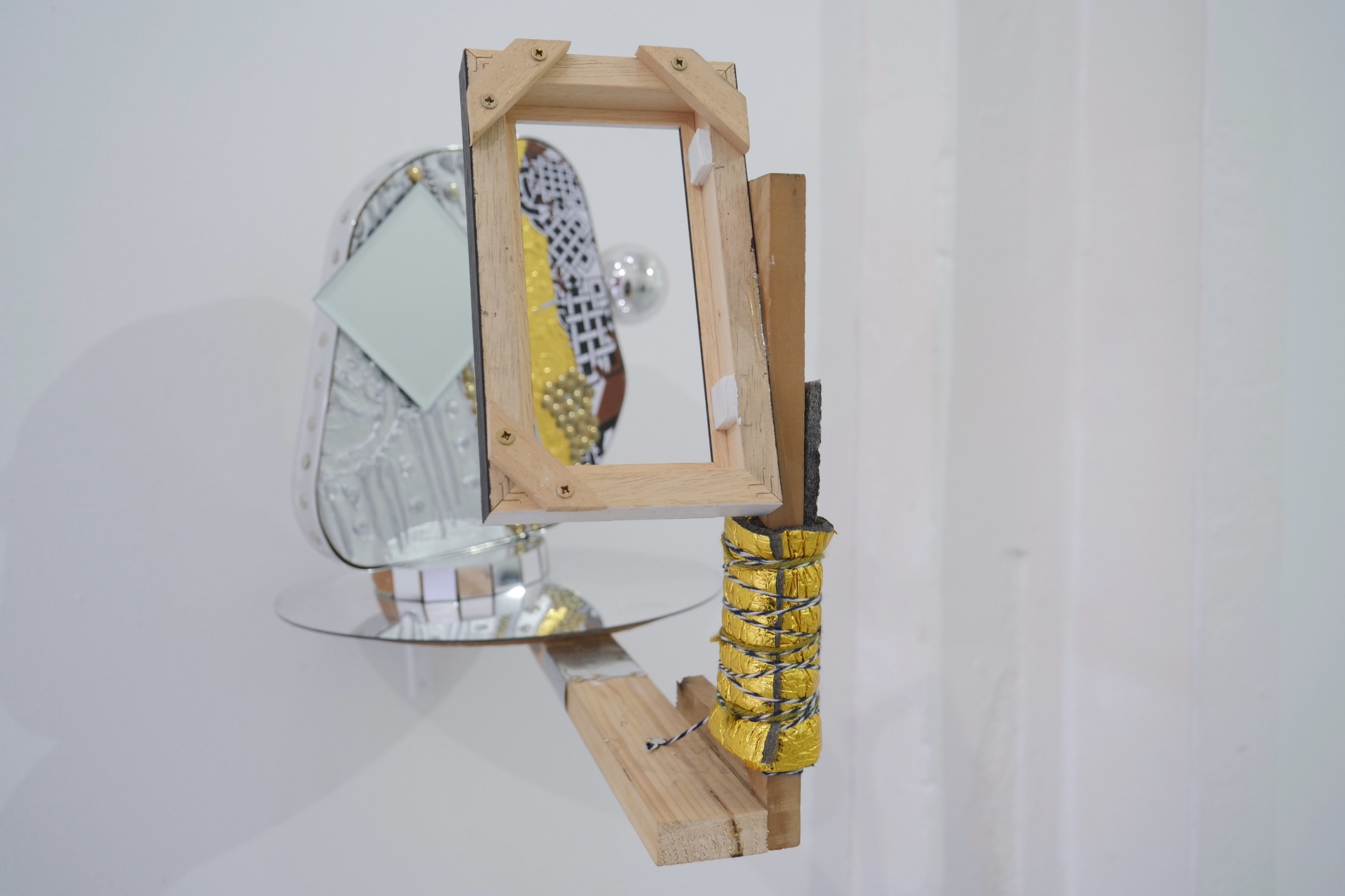 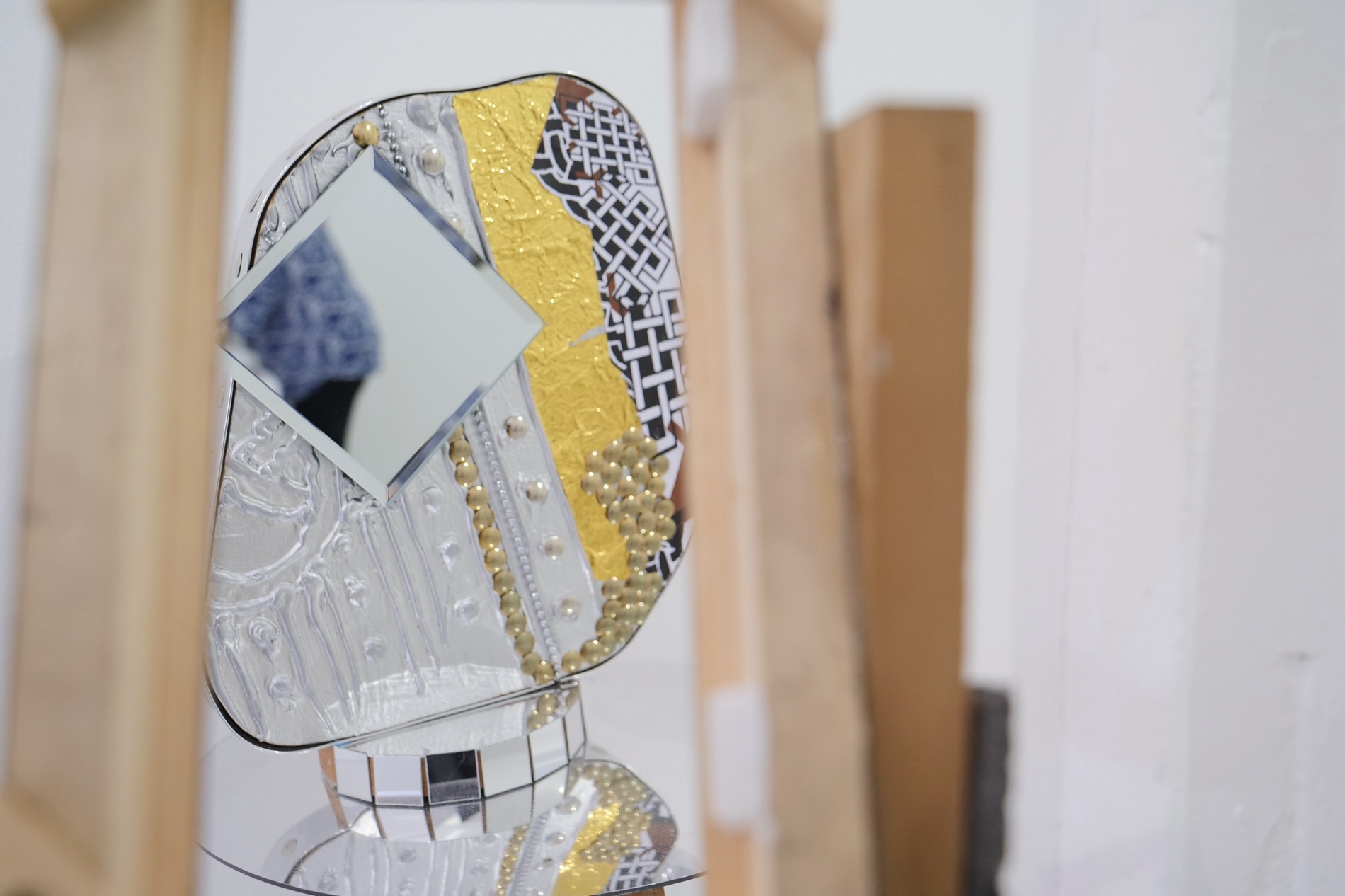 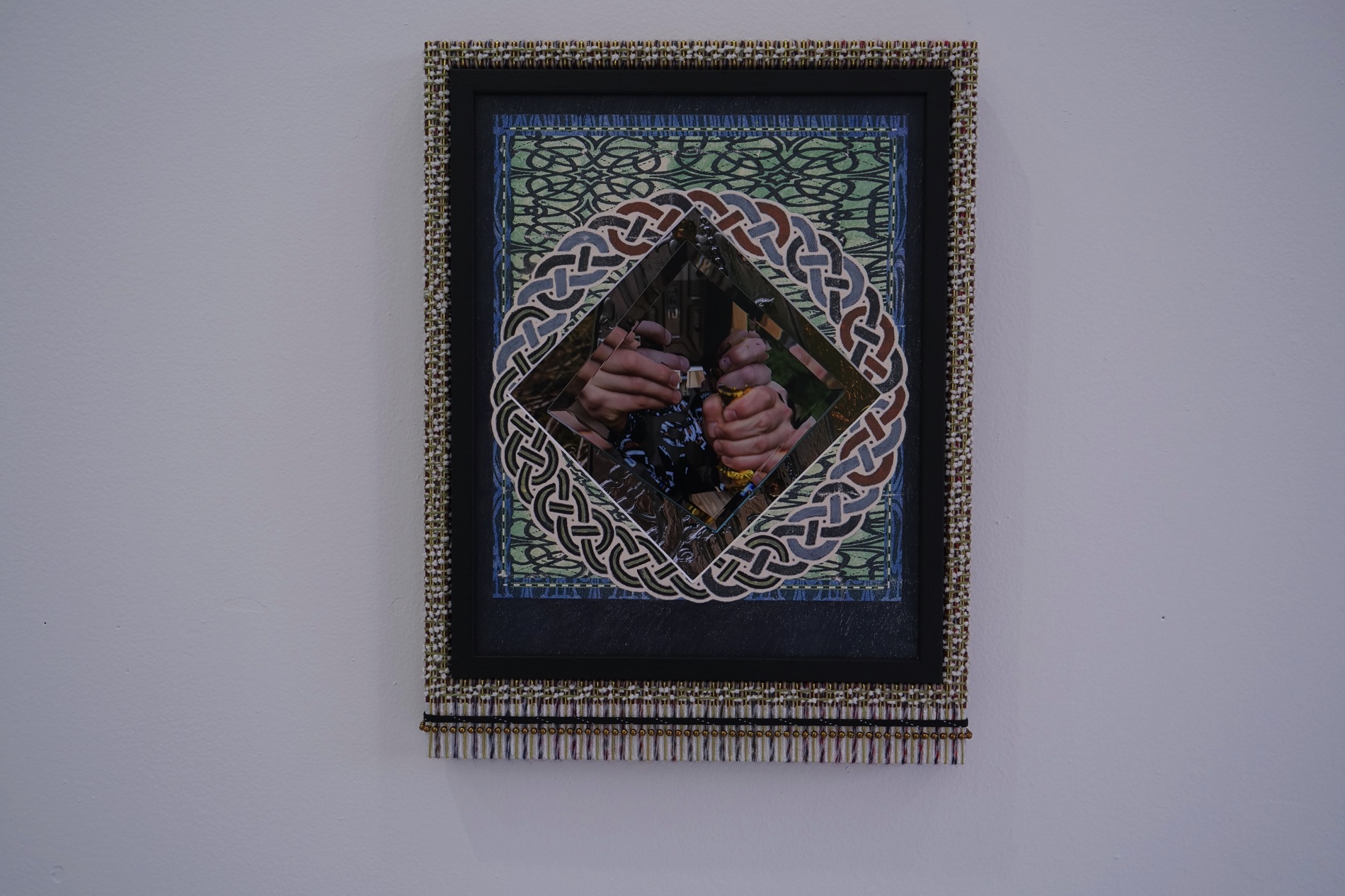 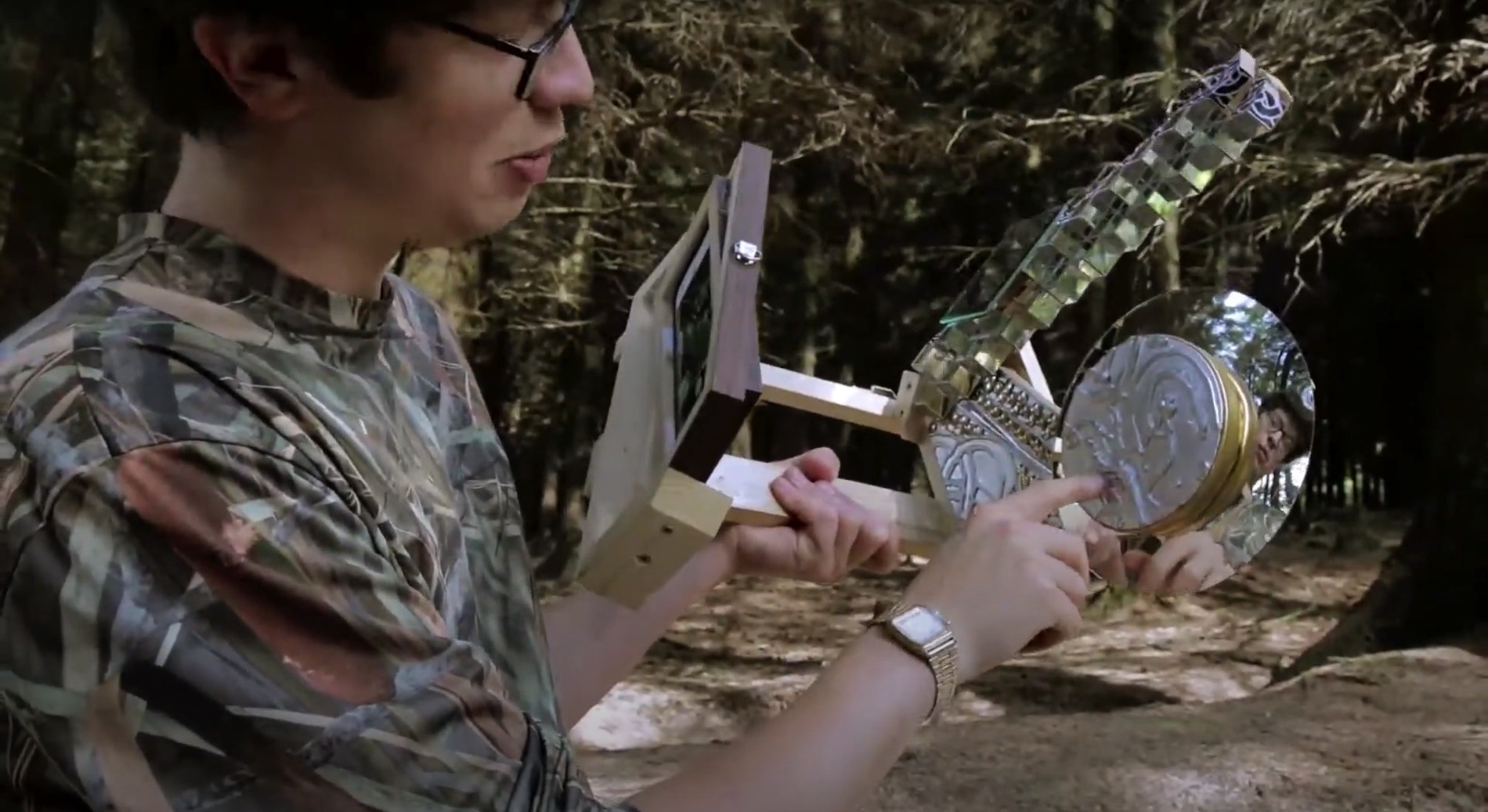 David Lunney’s artistic practice involves the undertaking of protracted art processes. Typically, these processes start with the construction of site-specific sculptural works in Dublin Mountains. These sculptures are generally created less for their inherent value but rather to provide photographic source material for documentary artworks.

In Things Twice (multiple times) points of view can be different and the same, simultaneously. The artist has used tailor-made sculptures to split apart and meld together a variety of vistas.

In the Drumnadober series this is achieved using formal symmetry, weaving, photography and pattern. Here, a sculpture was brought to some woodland in Co. Leitrim and placed into the ground.

Two photographs were taken of the sculpture from two exactly opposite angles. The compositional similarities of these two images are both highlighted and obscured in the central work, Drumnadober Dance.

Most of other work in the exhibition uses reflective surfaces instead of symmetry. A cameraphone is mounted in a fixed position relative to a matrix of reflective, shiny and matt surfaces. This, as a portable unit, was brought for a walk and photographed in the digital collages A walk at Kilmashogue Passage Tomb #1 and #2.

All the images gleaned from these sculptures are presented in detailed handmade frames which play an important role in the work. These frames ape a non-existent vernacular aesthetic; a neo-Celtic Baroque.

Lunney is represented by MART Gallery. This exhibition is made possible with funding by the Arts Council of Ireland.David Lunney is based in Dublin and currently a member of Talbot Studios, he has a BA in Fine Art from NCAD. Recent exhibitions include Chrome Dreams at Pallas Projects, April 2018, Re-Inforce MART LA November 2017, Landscape Contortion at Droichead Art Centre, August 2017, Glitch at Rua Red May 2017, Things Made for Drawing at Eight Gallery, 2016, Glencree Intervention at The LAB, 2015. David Lunney has been the recipient of awards such as; the Sculpture in Context Award 2014, Arts Council of Ireland Project Award (for Adorned Documents, collaborative project with artist Jane Fogarty) Falun Grafisk (Printmaking) Residency Award John Kelly RHA Black Church Print Studio Graduate Award. He will undertake a month long residency in Tynset, Norway in October 2018 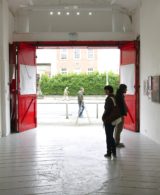 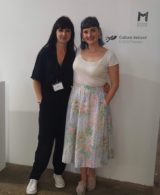